I’m pretty proud of this work. I was the only designer on it and I was driving it on my side and half-way through on Product/Project managements side too (due to some internal restructuring).

I will start with a release video

What did I take on?

Design a very light weight Skype mobile app that can run on Nokia feature phones.
Use GroupMe (its an app purchased by Microsoft) technical possibilities while making the app look and behave like Skype. And the app has to be on a feature phone (the one without touch screen)

with only 26KB available for the graphics

I started by understanding “who I’m designing for”
Based on the data I was given, I narrowed down to 2 user groups.

First time buyers – Survivors (phone is the only means to get online)
25-34; Raising young families, in low-income jobs
In poorer urban area or outlying towns and villages
Financially constrained; face daily hardships and want to overcome these and fit in with better-off society
Want a better life for family and a secure future. Education of children is key to making this happen

I started by looking at the user needs
Based on personas, I defined the goal of the project
Mobile users in emerging markets, would like to have a cheap/free way to talk with friends, family and other social circles, that works on inexpensive phones.

I narrowed down the features that we should have in the app based on user needs and tech constrains.
A lightweight Skype chat on
Nokia feature phones that provides the following:
1-1 Chat
Group Chat
Photo share

Both groups needed to (from research):
Stay connected
Create groups for interest and learning groups
Create personal group for large families
Have 1-1 messaging that is richer than SMS
Be able to share photos
Have an affordable & reliable low cost phone with long battery life and not easily breakable

I will now show some examples of the main use cases

The first issue I had to resolve is a phone number based sign in / authentication that we don’t have in Skype.
Considering the fact that use cannot fill in a form in-line it was an important flow to solve to make sure we have users going through it and not dropping out. From an initial set of about 20 screens I managed to negotiate to 9.
To explain the issue, when you sign up for something on a smart phone that requires phone number authentication, you will get a notification  that appears on top of whatever you are doing at the time. On feature phone, you do not get any notification that lets you know you recieved your PIN confirmation code. This adds many extra steps to the sign up process. I worked with developer’s to explain the value to the user of writing extra code to autofill the PIN by catching SMS message with the PIN on the background. 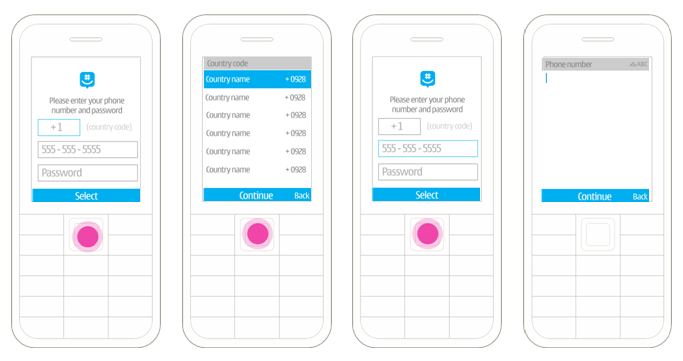 UC. 2 Share photos
It was clear from the research that photo sharing was a “must have”. I really wanted to enhance the experience by providing “in-line” photo share. What it means is that when you send/ recieve a photo, the preview is visible right away in the chat instead of a link to open it. 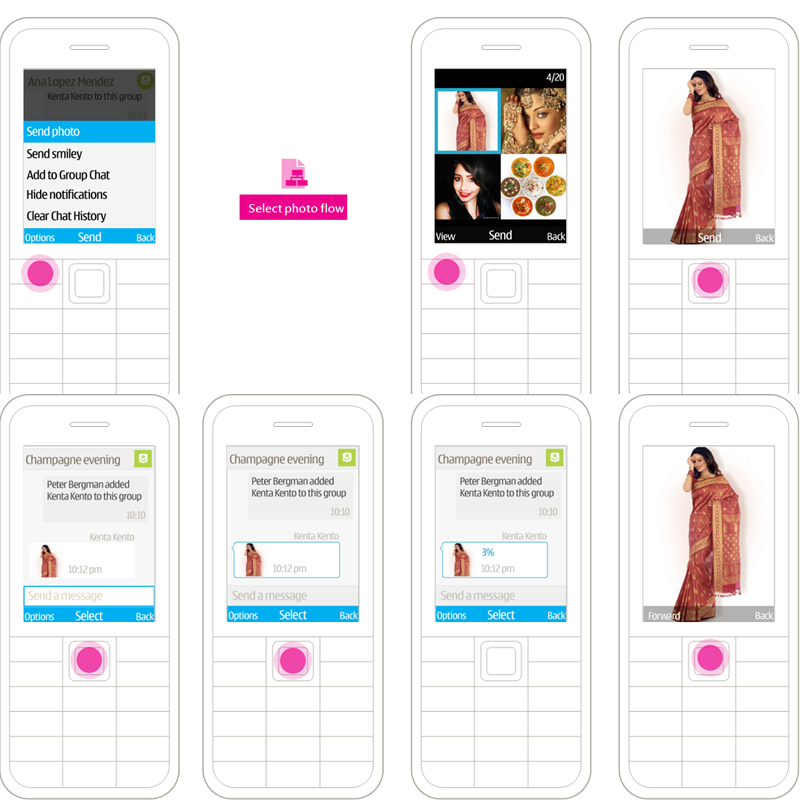 UC. 3 Emoticons
On a feature phone, there are no emoticons. I have provided user research evidence that emoticons will be a desirable feature for our users.
We agreed to stick to the remaining size allocated from the 25K to integrate emoticons.
I looked into most popular emoticons.
I picked 9 to put as part of the app based on popularity of usage. 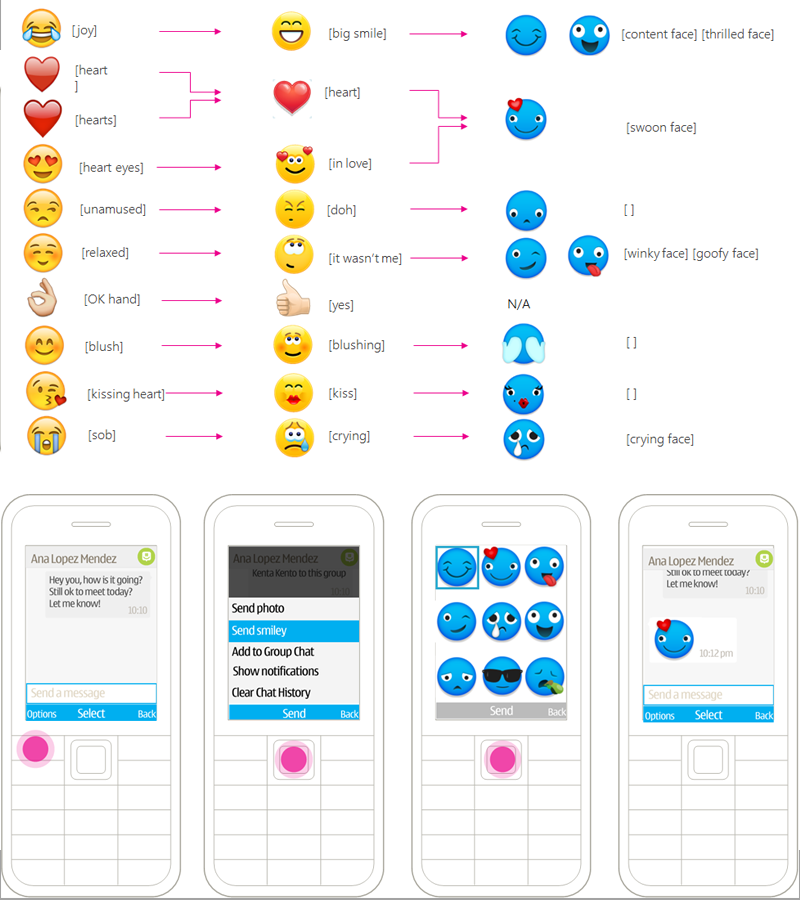 Just in case you did not notice