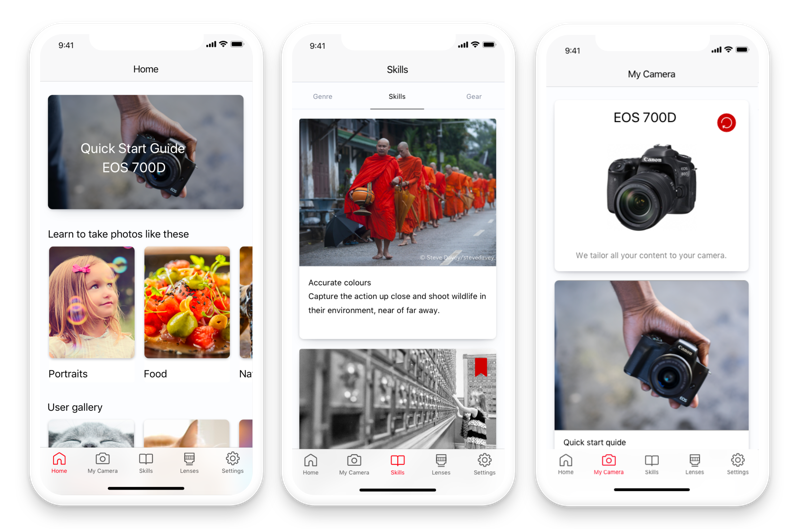 I started by mapping out the existing app architecture and analysing the usage. There was a clear pattern of user journeys and drop off points.

Main issues were the difficulty of discovering content due to the sporadic content organisation, lack of direction for the user. Another issue was heavy reliance on user input which as experience shows is not a right way to go. For example, by asking the user to select his skills level from a multiple choice of Beginner, Intermediate, Advanced was a confusing task as users did not know what level they are or had an idea of their level which was subjective. They also worried about not having access to the Intermediate or Advanced level if they picked Beginner at the starts.

Another drop off point was request to create an account before having any idea if the app has any value to them.

Usage of unconventional iconography increased the confusion as well.

After analysing the data and interviewing users, I have come up with a new app structure for the MVP which would give us a clearer picture of user behaviour.

I identified a set of common reasons for the app usage by interviewing users:

I decided to structure the app navigation exactly in that way. 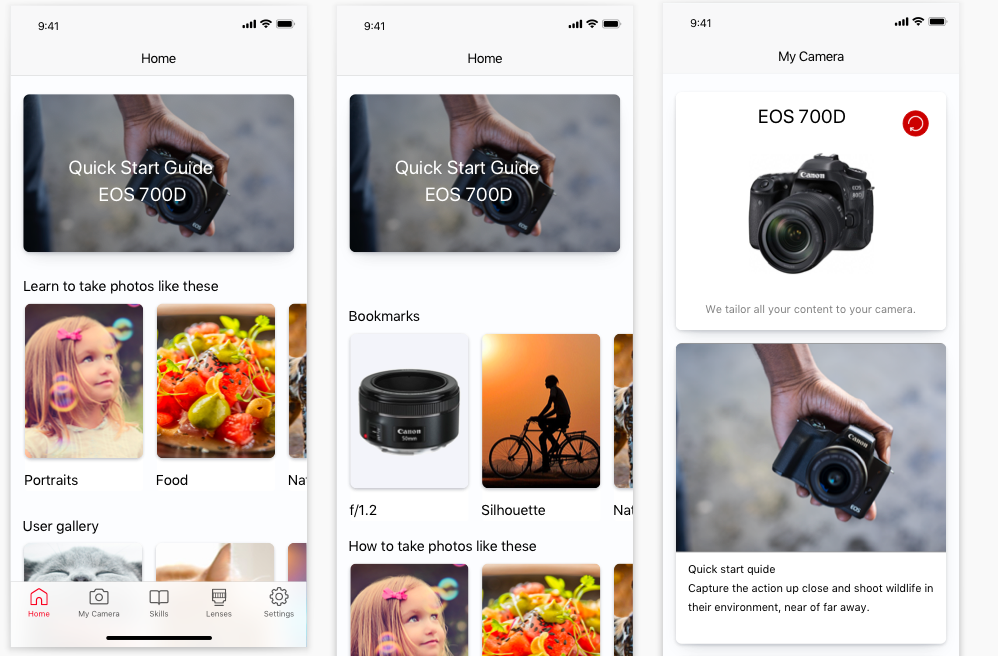 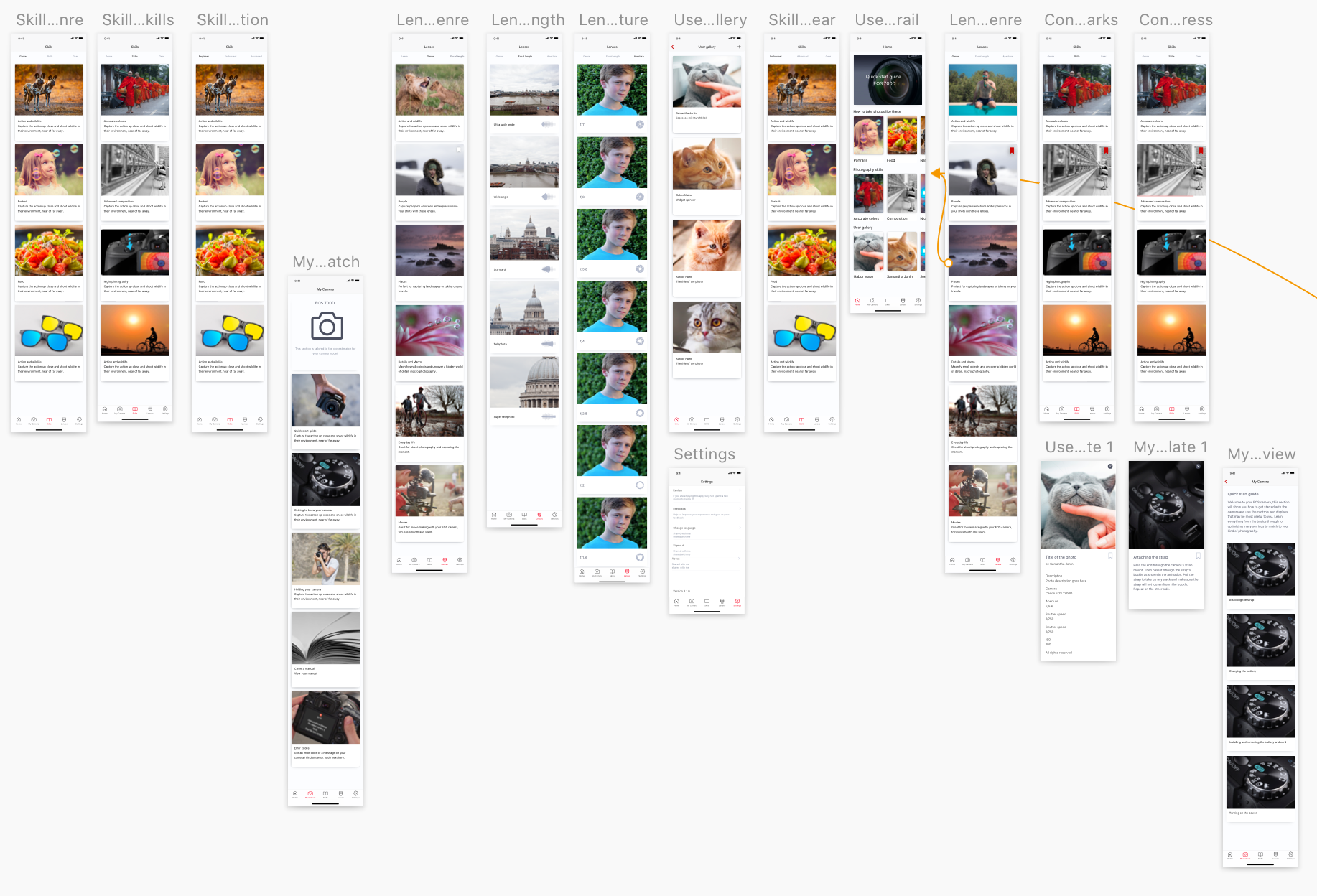 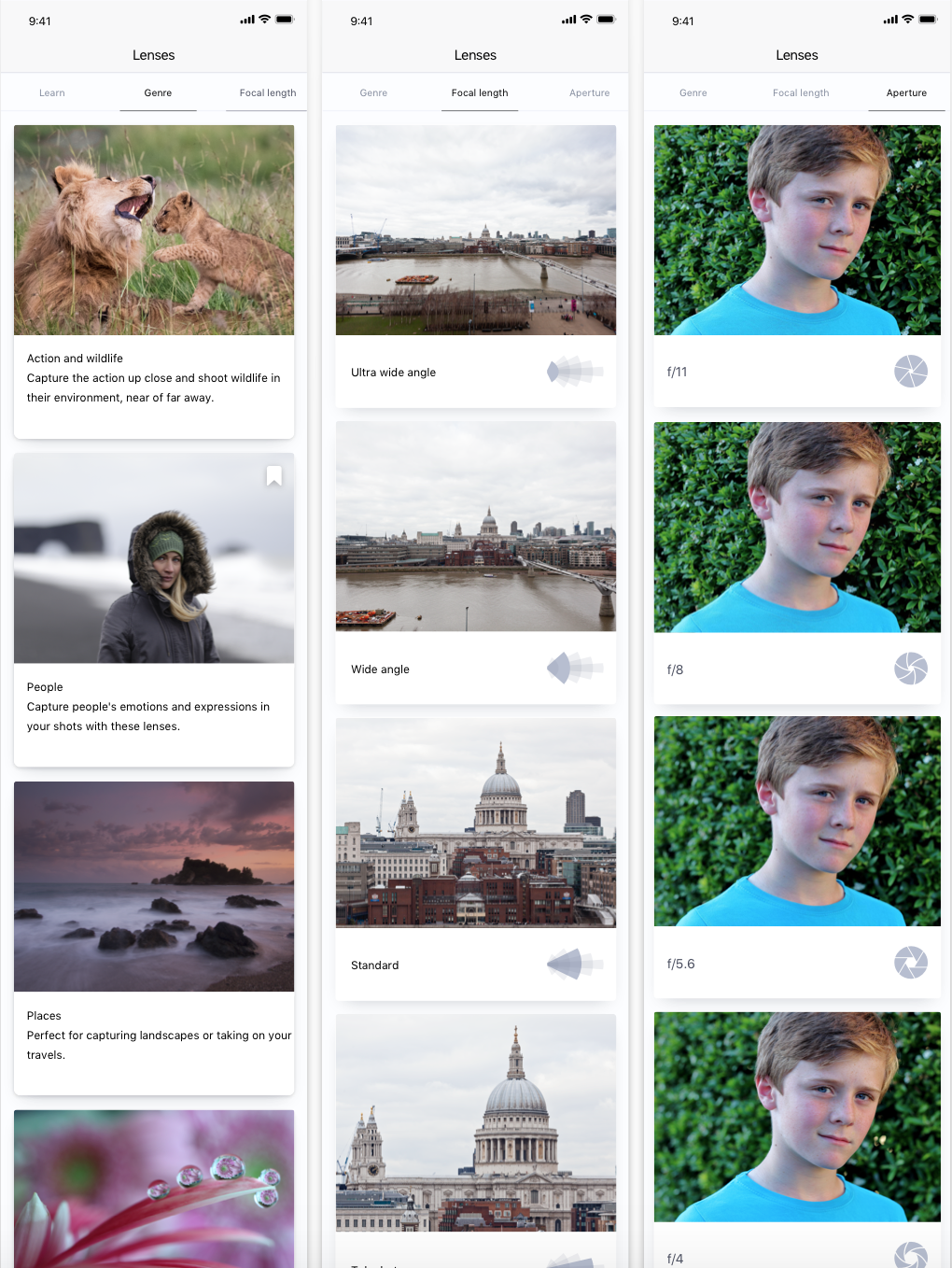 Here, users can learn the story behind the photo, the techniques used and also exact location – photographers can find it and try to replicate or take an even better one. 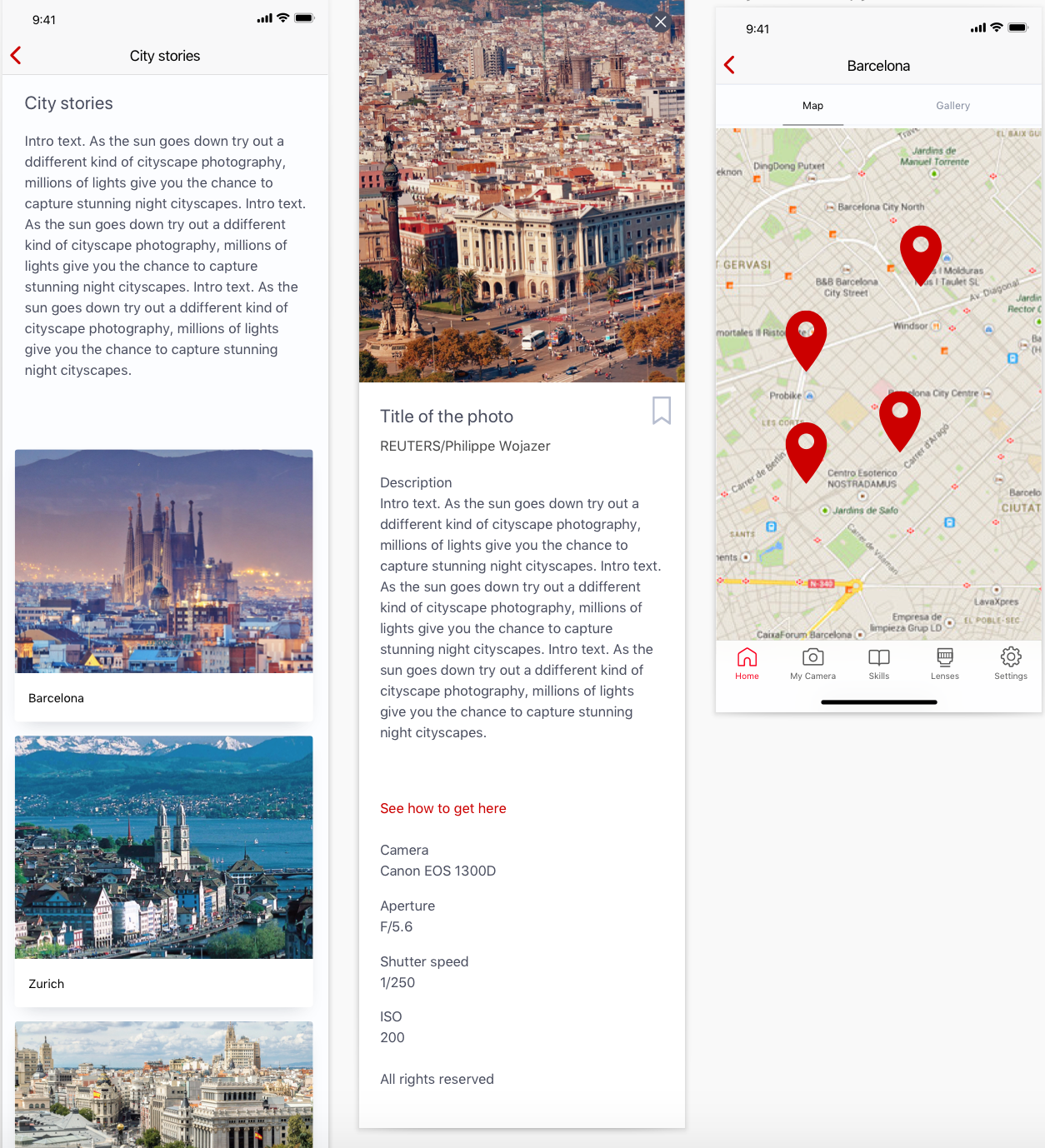 After analysing the type of content each learning module might contain, I created a fixed set of modules for MVP. They included, Video, Text and Photo manipulation modules. These allowed the team to quickly build the modules and for content team to re-assemble the content by using those modules, reducing work load on front end developers. 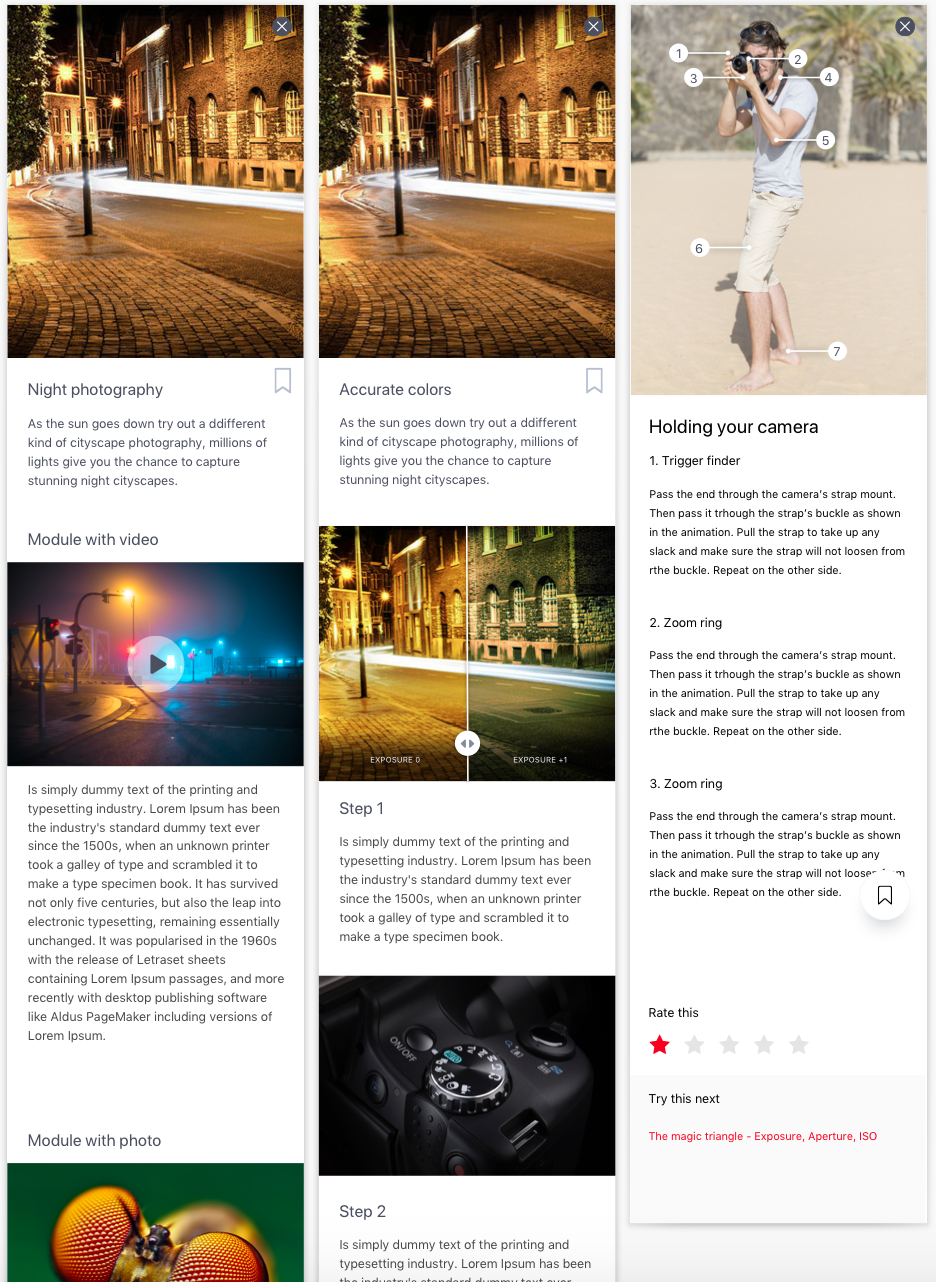 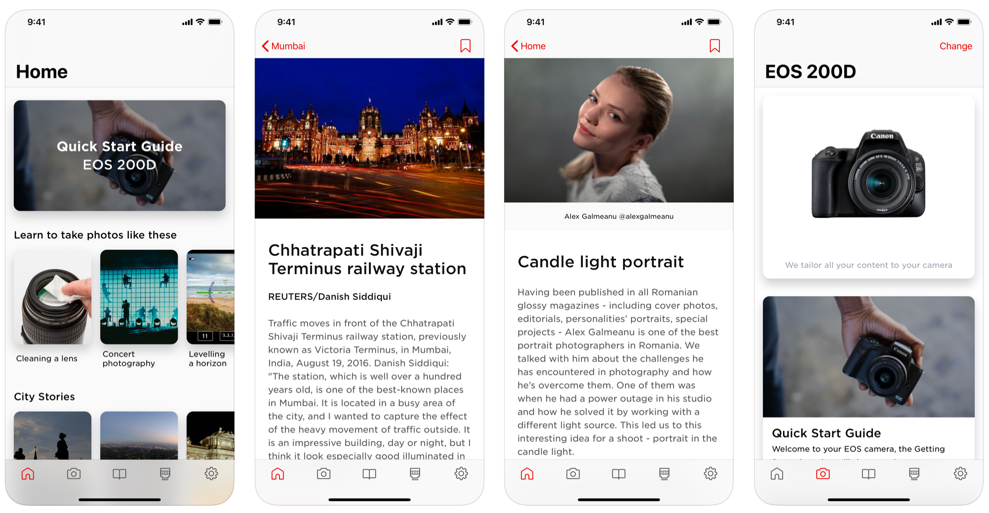 I lead a small team consisting of Project Manager, mobile developers and content, (design being done by myself), at Canon Europe in re-design of a Canon Photo Companion app.

The app teaches how to take great photos using of Canon camera and teaches photography in general.

It took us 6 months to release the app on iOS and Android mobiles and tablets by being agile, realistic and collaborative.

Take photos you are proud of

My gratitude and credit goes to my amazing team at Canon.