This is a cheat sheet for me. These are some of my favorite books and my notes from them, so I can get back to them when I need to. 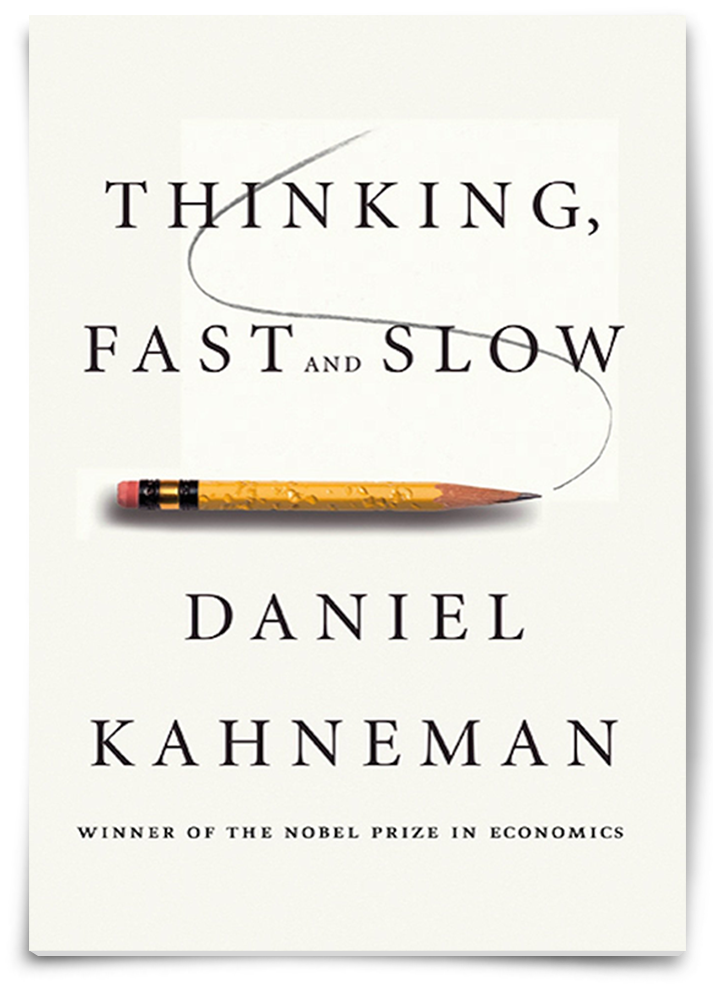 “As we navigate our lives, we normally allow ourselves to be guided by impressions and feelings, and the confidence we have in our intuitive beliefs and preferences is usually justified.  But not always.  We are often confident even when we are wrong, and an objective observer is more likely to detect our errors than we are.” – Daniel Kahneman

If you are a UX Designer and have not read it, just do. Find out about how people think. How they make decisions and about our fast and slow thinking systems.The book explores, in great detail, how we possess two basic systems associated with judgement and choice:

System 1, does the fast thinking, it constantly constructs a coherent interpretation of what is going on around us at any instant. This system operates automatically and quickly, with little effort or no effort at all. There is no sense of voluntary control. Examples of when System 1 is in action: reading large words on a billboard, what is 2+2, detecting anger in someone’s voice. System 1 is intuitive and reactive.
System 2, does the slow thinking, it allocates energy to the mental activities that demand it, including any complex computations. System 2 is associated with effort, concentration and choice. Examples of when System 2 is in action: focusing on one voice in a very noisy room, filling out your taxes, checking the validity of a complex argument or algorithm. System 2 is actually quite lazy, much more so than System 1, which causes us to use hunches and heuristics more often than not, often to our detriment when it comes to investing.

Anchoring
We see this in marketing all the time, Kahneman writes about an example of Campbell’s soup on sale. On some days the sale sign says limit 12 per person; other days there is no limit. On days when there is no limit posted, twice as many cans were purchased even though the sale price was exactly the same. In this case there is no anchor or starting point holding people back. Kahneman says we see anchoring in the real estate industry as well, when a homeowner is selling their home. Setting the sale price is the anchor and this anchor drives buyer behaviour and the negotiating process.

Hindsight
Kahneman writes “hindsight is especially unkind to decision makers who act as agents for others – physicians, financial advisers, third-base coaches, CEOs, social workers, diplomats, politicians. We are prone to blame decision makers for good decisions that worked out badly and to give them too little credit for successful moves that appear obvious only after the fact.” Investment decisions that seem to make sense at the time can look very irresponsible in hindsight.

Illusions of validity and skill
Kahneman asks, after being introduced to a senior investment manager at a Wall Street firm, “when you sell a stock, who buys it?” Kahneman questioned the validity and skill of stock market traders, what information could sellers possibly have over buyers in an efficient market, hardening his perspective the financial trading industry has been largely built on an illusion of skill. If all assets in the stock market are supposedly priced correctly, then no one can expect to either gain or lose by trading in the short-term because the information available is the same for both parties. This notion confirms why many individual investors lose money by trading in the short-term, an achievement Kahneman writes “that a dart-throwing chimp could not match.” In our highly efficient stock markets then, educated guesses on short-term prices are no more accurate than blind guesses including those made by professional money managers. The lesson, avoid trading.

Use of formulas
In Thinking Fast and Slow Kahneman not surprisingly has a bias himself, to replace human judgement with formulas and scoring ratios where possible. This would reduce the role intuition and emotion has with major decisions.

Loss aversion
System 1 responds strongly to losses over gains, we’re wired this way and most psychological studies support this. As a consequence we tend to think and act in the extremes (a loss or a gain) with little compromise in between. It is not surprising then that most investors are fraught with emotion when it comes to investing decisions instead of being calm and rational.

Overconfidence
Kahneman cites a survey of CFOs from major corporations who were asked to predict the S&P 500 performance the following year. The study found their estimates and the actual S&P 500 results had no statistical relationship.

The Summary
Fast thinking (using System 1) is not wrong in fact in many cases it is absolutely necessary in our lives. Yet when it comes to investing you should rule out using System 1 by recognizing when it’s taking over. Using System 1 for investing will often result in poorer decisions based on emotions and reactions, being far less rational than we need to be.

We are born prepared to perceive the world around us, recognize objects, orient attention, avoid losses, and fear spiders” –Daniel Kahneman. 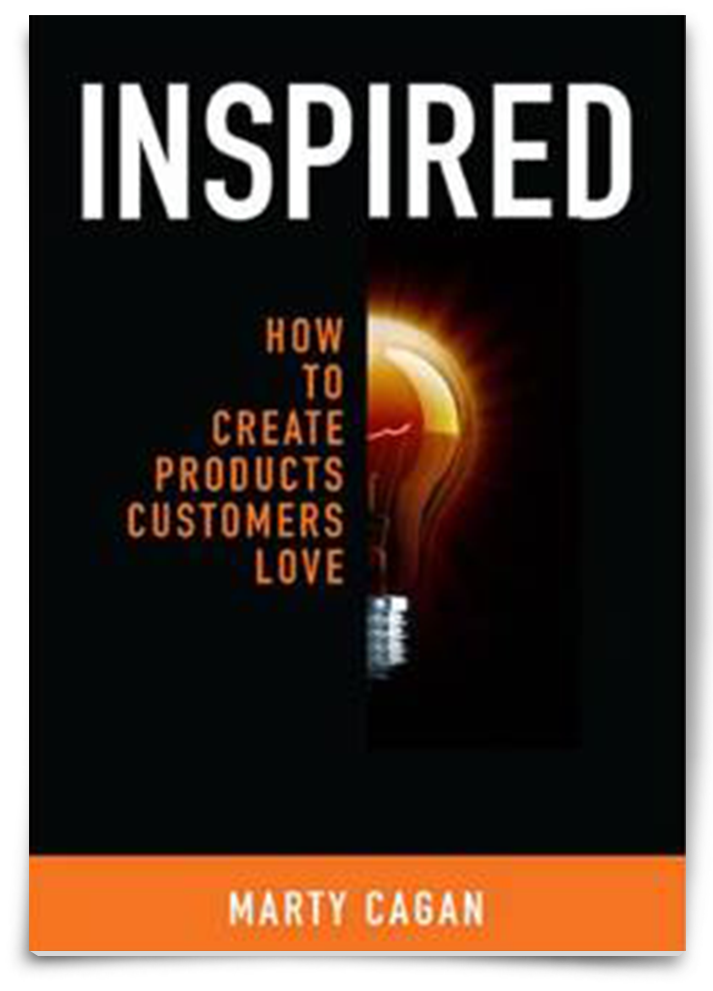 When Skype moved to Agile development process, the first thing I did is to qualify as a SCRUM master in order to understand the process and to translate it to UX process. But before that, our Head of UX organised a 2 day workshop with Marty Cagan who showed us how to make better products with Agile, how to organise the teams and how to answer the most important product questions through real examples and tools. I think he was the most brilliant person I have met. In the book you will learn beyond theory, the direct instructions on how to organise a team to deliver the best product 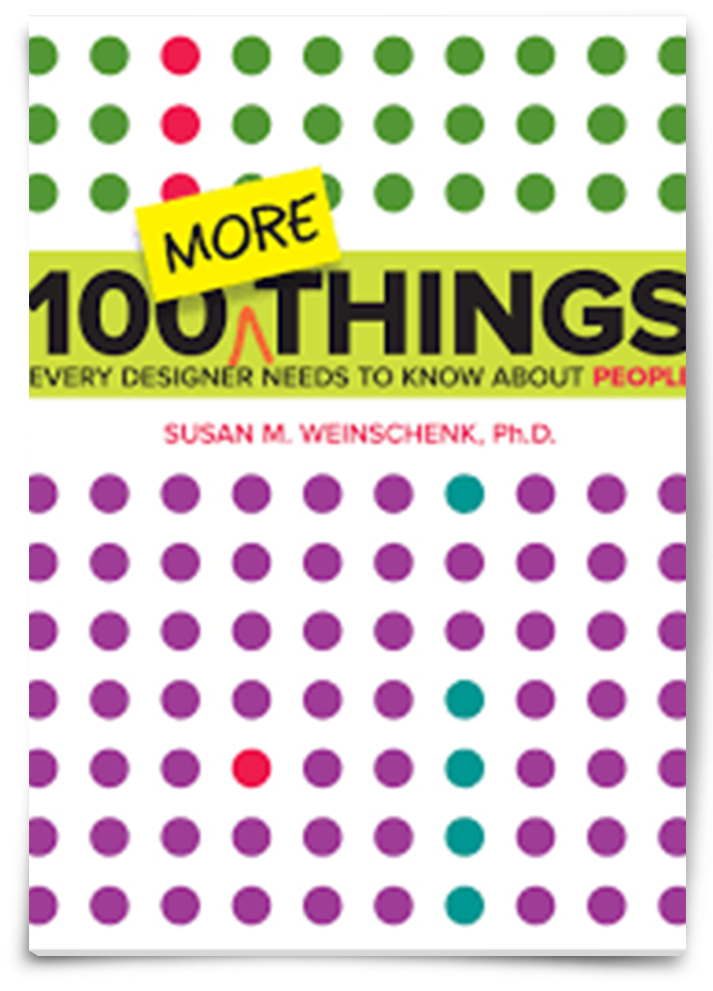 I have read the 100 Things awhile ago and it was my reference book until it became outdated. I was very excited to get an updated version and it did not disappoint. In the book Susan accounts for latest research including learnings from “Thinking fast and slow” and how to use it in daily UX work.

4. Brainwriting vs brainstorming – if you use an open brainstorming when everyone can openly post ideas on the wall you get the team anchored towards the first ideas. Better results is to ask people to write out their ideas in silence and then ask them to write one idea, pass it to the next person to continue the idea and so on until the full circle is completed.
I tried that in a workshop and i agree this yields great results.

5. How to engage creative part of the brain
First, you need to engage your executive brain network – to identify the right problem / right question to answer.
Then, you need to disengage the executive network and evolve the default brain network to engage creativity. What this means is walking away from any task that involves your executive network such as reading for example and to do an unrelated task, for example sit and think, or clean the house or something similar.
Keep a notepad at hand to write down what you think of.
Make sure your managers understand that this is what it involves.

7. Never offer reward for help if you want your community to help you.

8. Expectation is more satisfying than instant gratification. Think about it for same day delivery.

9. A simple visual presence of a mobile phone can disengage your audience. Just remove any of your digital devices out of view. Weather for interview or user testing or meeting. 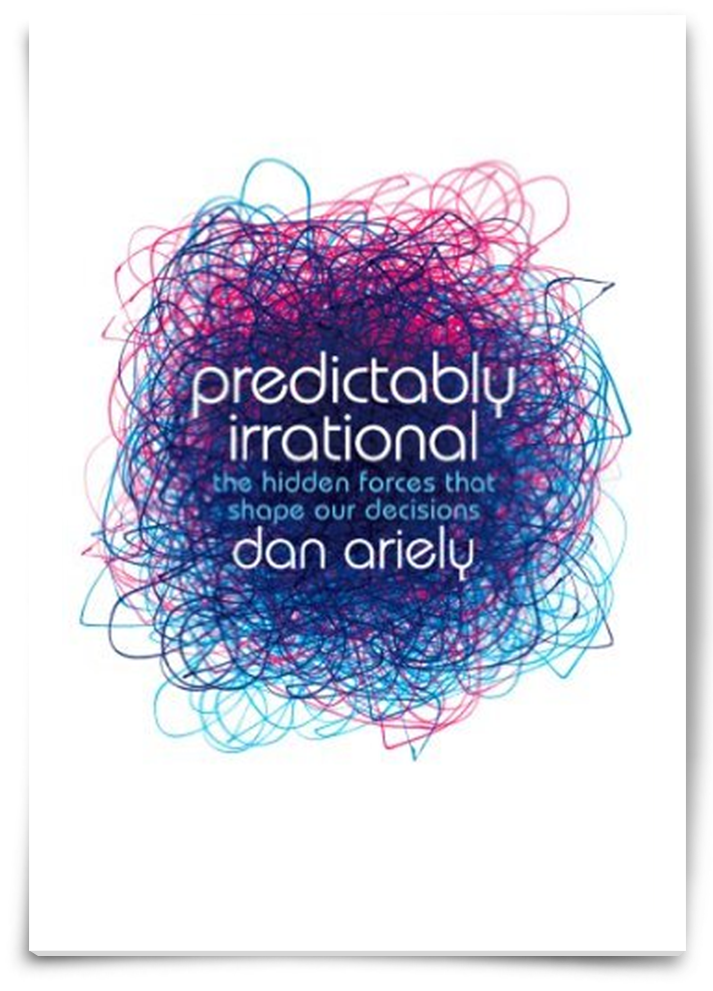 Predictably Irrational: The Hidden Forces that Shape Our Decisions (2009)
Dan Ariely
In this book you will find many examples from real life experiments to support the subconscious decision making process we all have, and it is a great easy book to read. 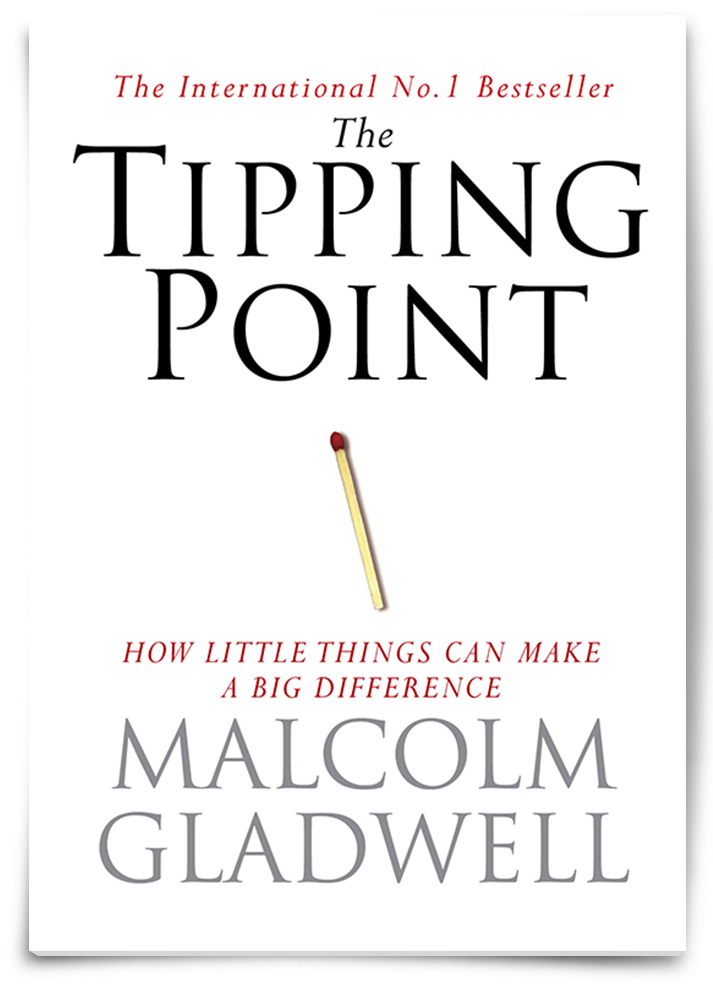 The Tipping Point: How Little Things Can Make a Big Difference
Malcolm Gladwell

If there ever was an equivalent of “fiction” for Designers this would be it, in t he best sense of it. Read all Malcolm Gladwell books in your spare time for inspirations and understanding what makes people and companies succeed.

In this book
The Law of the Few, the Stickiness Factor, and the Power of Context – these rules can be applied across the board from predicting a bestselling novel, to explaining the rise and fall of crime, to understanding why children’s television shows can convey educational values, and most importantly, how to learn and apply the rules of social epidemics to marketing.Connectors, Mavens, or Salesman. The lesson here is “that the success of any kind of social epidemic is heavily dependent on the involvement of people with a particular and rare set of social gifts”Connectors – they are responsible for bringing together different worlds. They are able to translate a high-level concept or idea into a format that a broader audience can understand. Here, Malcolm Gladwell reiterates the six degrees of separation concept. What fascinated me, in addition to this, is the ‘the strength of weak ties’ especially in the context of, for example, employment. Sometimes the greatest opportunities arise from seemingly weak ties.
Mavens – these are knowledge accumulators. They aren’t just obsessed with information collection but also want to share it with others for their benefit.
Salesmen – these are powerful influencers. They can affect the emotions of others and are charismatic individuals.The Stickiness Factor
The ‘stickiness factor’ refers to memorable messaging and is:
– What makes a product/service/experience memorable to consumers
– About creating a message and interaction between consumer and product that makes it memorable. It makes consumers feel a part of the journey.
– Viewers aren’t just an audience, but become participantsThe Power of Context “epidemics are sensitive to the conditions and circumstances of the times and places in which they occur” – the environment can have a tremendous impact on human behavior.One particular story illustrates the Power of Context exquisitely.“Broken Windows theory,” developed by criminologists James Wilson and George Kelling, explains, “crime is the inevitable result of disorder”. A broken window is an environmental factor that suggests indifference and apathy for the surroundings. This seemingly minor blemish can ignite an epidemic of petty crime, which leads to serious crime, as the case was in New York City in the 1990s. Using Broken Windows theory to abolish crime in the transit system, the city removed graffiti and imposed consequences to fare-beating in order to establish visible police presence. As a result, crime in the New York subway stations dramatically declined.